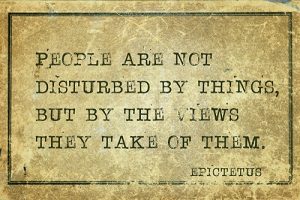 Dusan Djukich wrote in his book ‘Straight-line Leadership’, “Most failure comes from quitting too soon.”

I guess we have all had projects, ideas and changes we intended to implement but, as he says, we have quit too soon.

If we had stayed in the game, then we would have created much greater success. And this would have led on to other things we had not yet even imagined.

So, why do we quit too soon and, far more importantly, how to we stay in the game in future?

Let us take three common and unavoidable situations of being in business.

1. If you are selling something (services, products, ideas), you will get turned down by some people.

3. When you try new things, sometimes they will not work. Some things may fail altogether.

Although these situations are facts of life in business, the pain of rejection, criticism or failure stops many people – some temporarily, some permanently.

But this also puts us between a rock and hard place, doesn’t it?

The immediate pain is avoided and yet it potentially leaves us to face the far bigger pain of regret.

So, we have two options.

The no pain, no gain approach where we force ourselves to face the pain of taking things personally and battle on anyway. We do our best to cope under the circumstances.

There is the no pain, no pain approach, which is based on a completely different understanding of what is going on.

The no pain, no gain approach is based upon the misunderstanding that the event causes the feeling. For instance, if someone turns you down and you feel bad, then the bad feeling was caused by them turning you down.

This misunderstanding makes you a victim of circumstance and puts your feeling of well-being at the mercy of events you often have very little control over. It is also very stressful. And who wants that?

The no pain, no pain approach is based upon the true understanding that when we take things personally it is not caused by the situation; it is purely an indicator of our state of mind in that moment.

In a clear state of mind, we never take things personally and do not make it mean something negative about ourselves.

Therefore, rejection, criticism or failure (which are only labels anyway) are like water off a ducks back.

What difference does this make?

There is tremendous freedom in realising that situations have no power over you.

As we realise the only thing we were afraid of was our own thinking, then we are far more willing to get in the game, and stay in the game.

We do not quit too soon.

I find that I can still, on occasion, take things personally and yet I catch on to myself so much quicker. Clients report the same experience. One of my adviser clients said he used to brood for a week or two if someone turned down a proposal. Now, he said, it last about 10 minutes!